Everything You Need to Know About the New SAT 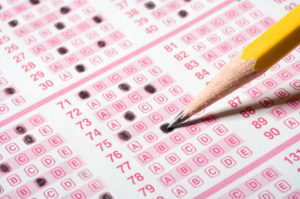 The famous rite of passage for hopeful high school juniors and seniors preparing for college is undergoing some very important changes.

The College Board has given the SAT a makeover, which it says will better reflect changes in the classroom brought on by the Common Core academic guidelines. The new SAT comes on the heels of California’s Common Core-aligned standardized test administered last year for the first time.

With the new SAT comes new testing anxiety for students around the country — something school districts throughout the region are working to ease by offering help to students in the classroom this year.

For example, obscure words — such as “prevaricator” and “sagacious” — have been eliminated from the new SAT reading section and replaced with more commonly used words such as “synthesis” and “empirical.” That section also no longer includes sentence completion questions.

These shifts will change how students study for the critical reading portion of the exam. For example, there will be some aspects that draw similarities from the ACT Science section such as analyzing graphs and charts. Moreover, there will be “dual questions” in the new format, where one question will ask about a particular aspect of a passage and the next will ask for the best evidence.

The redesigned exam will cover three areas: math with data analysis, evidence-based reading and writing, and an optional essay. However, some colleges and universities may still require the essay.

The College Board will also return to the 1,600 scale for scoring (instead of the current 2400), with the essay scored separately.

The new SAT will also reduce the number of answers to multiple-choice questions from five to four. And in another key change, students no longer lose points for wrong answers but just continue to receive points for correct answers. The College Board has argued that this will encourage students to guess rather than skip questions.

The final administrations of the current SAT will be given October 2015 through January 2016. High school seniors will take the old test, while juniors may take either or both tests. The choice of whether to take the the old or new SAT will vary for each junior and comes down to several factors: previous PSAT scores, plans to take the ACT, scheduling, and college goals.

In addition to the shake up of the SAT, the PSAT will be presented in the format this October. The College Board has also come up with the PSAT 8/9 for eighth and ninth graders and the PSAT 10 for high school sophomores. These exams are designed to track student preparedness for the SAT (and college) over a period of several years.

Whether the new test means better scores remains to be seen. Nationally, SAT scores have been on a steady decline for the past decade while more students have been taking the test. California’s scores have followed the trend, though the state has consistently been above the national average.

There will indeed be a lot of shifts coming to this new iteration of the SAT. But our organization remains confident in the ability for students to learn the correct methodologies for doing well and for being accepted into their dream institutions.