How are the SAT and ACT scored?

When Should I take the SAT or ACT?

Many students and parents, trying to maximize their standardized test scores (and, in turn, their chances of admission and scholarships at the universities of their choice), try to figure out the ‘right’ time to take the test. There are rumors that April is the best time to take the test to get the best curve, or that August is the worst time to take it to get a good curve, etc. These are incorrect. In truth, there is no test date that is any better than any other test date.
The reason for this has to do with how the tests are scored. We often think of the SAT and ACT as having ‘curves,’ and we inherently think of this in the same way a grade in school might be curved: the worse that the average grade is, the bigger the curve. This is what leads people to think that a certain test date might be better than other test dates. They think that they just need to find the date that has the worst average score so that their scores will be ‘curved’ up higher in comparison. It doesn’t actually work this way.

How are the SAT and ACT Actually Scored?

Instead, both the SAT and the ACT are scored as standard-referenced tests. This means that each student’s score is in comparison to certain college-readiness standards. Higher scores indicate that a student is more prepared for college, while lower scores indicate that a student is less well prepared for college. These standards are developed separately by SAT and ACT, but in similar ways. Both organizations do research on what types of knowledge students need to succeed in college, and then set these as the standards around which they design their tests.
Thus, if every single student was perfectly meeting all of these standards, they could all theoretically get a perfect score (36 on the ACT, 1600 on the SAT). This is unrealistic, of course, but it does show the difference between the standard-referenced test and a true curve. In fact, even though people often talk about the `curve’ on a certain ACT or SAT, it is worth noting that SAT and ACT don’t ever use that word. ACT has a `Scale’ that converts the raw score to a final score for each section of each test, while SAT similarly has a `Raw Score Conversion Table’ that converts a raw score to a final score for each section of each test.
Because both tests are based on the knowledge, or skills, that most strongly predict student success in college, they can change over time. The skills that are most useful now may not be the same skills that were most useful 30 years ago. This is part of why both organizations implement changes to their tests periodically. It also means that the average score could theoretically change over time{if students become, on average, better prepared or worse prepared for college, we would expect the average score to go up or down. We can actually see this if we look at average ACT scores over time. 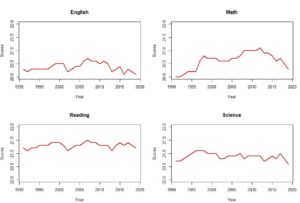 ACT scores generally rose from 1991 to 2007, and have since declined almost to where they were in 1991. This recent decline has been particularly severe in the past few years. This may be due to changes in student aptitude, or it may be due to changes in the standards for college readiness used by the ACT. Either way, it is a demonstration of the idea that standardized tests are judging students by certain standards of college readiness, rather than by how students do compared to their peers.

If tests aren’t `curved’ based on how the other students perform, why do different tests get different scales? The short answer is that SAT and ACT adjust their scores based on the difficulty of the test. A certain raw score on a harder test will yield a higher scaled score than the same raw score on an easier test. For example, see the difference in the scales between the SAT Math sections given in January 2017 and October 2018. 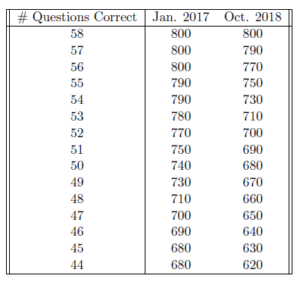 To get a 700 in January of 2017, one would need to get 47 questions correct. But on the October 2018 test, one would need to get 52 questions correct. This is because the October 2018 Math sections get rated as much easier than the January 2017 Math sections. This is part of a process that SAT and ACT call `equating.’ The goal of this process is to maximize reliability: if the same person takes both tests, they want that person to get the same score on both tests. In other words, no matter how easy or hard the test is, an individual should get the same score. So even though the January 2017 SAT and October 2018 have quite different scales, somebody who scores a 650 on one test would be expected to get a 650 on the other.

How do they decide which tests are easier and which are harder?

On this topic, SAT and ACT are somewhat more guarded with their information. One way that they do this, however, is through experimental questions. Sometimes, though not always, when students take that SAT or ACT, they get a 5th section.
When the tests do this, it means that they are including extra questions that are not scored on that test. Instead, they are being tested for future tests. It is worth noting that the experimental (i.e. non-scored) questions are not necessarily all in the 5th section. Instead, they might put some non-scored questions earlier in the test, while putting some operational (i.e. scored) questions in the 5th section. They then take these experimental questions and statistically analyze their difficulty based on how well students performed on them. Then, when these questions end up on future tests, their difficulty ratings are used to create the new scale for that test. In other words, the scale of the test is not based on how other students do on that test administration, but is instead based on how students have done on those questions when they appeared on previous test administrations.
This is one method that SAT and ACT use to assess the difficulty of each test. There may be other methods as well. But the more important point is that the scale is not based on the other people taking the test on the same date. So there is no `best’ or `worst’ date to take a standardized test.
This also means that if you get a 5th section on your SAT or ACT, you should absolutely do your best on it. There is a chance that these questions are actually affecting your score, particularly on SAT.

So when should I take the test?

We now know that there is no `better’ or ‘worse’ date to take it in terms of the curve of the test. However, there might be a time that is better or worse for your particular situation. You should take the test whenever you will be best prepared for it. This will vary from student to student. Below are some considerations you might consider:
Ultimately, the most important thing is that you take it at a time that gives you time to prepare for the test ahead of time. That ideal time will be different for different people.
Still have questions? No problem. Let us know, and we would be happy to help.
Next Post

What to do in Summer